Details of research and project work from affiliated artists, collectives and organisations working with SoundFjord.

R/E: As an ongoing series of research-based residencies and experiment-led, short-run exhibitions, R/E: focuses on new ideas and previously unexhibited works. The remit of R/E: is to foster a nucleus for debate and to encourage the questioning of sound practice and its concerns, to act as a platform for works at a pivotal stage in their development/production, and to provide the artist and the work with space for contemplation, within a nurturing environment, whilst or papers/research are given or work is exhibited to the general public.

From 30th May to 4th June, Sarah Harvey continues to research into her project Chambers, a work that takes an alternative look at the ECG (Electrocardiograph), as a way to construct 'Heart Music'.

The general public may visit Sarah during her residency. Please contact the gallery for an informal appointment on 020 8800 3024 or soundfjord

From 07-12 March 2011, Tim Yates will install an 8-channel work entitled 'Drone Room: An Interactive Distributed Musical Instrument'. Tim will operate an open studio. During these March dates, he actively invites members of the public to experience and, more importantly, interact with his work, an interactive installation with touch-screen technology.

This work is a prototype. Tim welcomes you to try out this unusual instrument. He looks forward to receiving your observations, questions and opinions regarding Drone Room. For 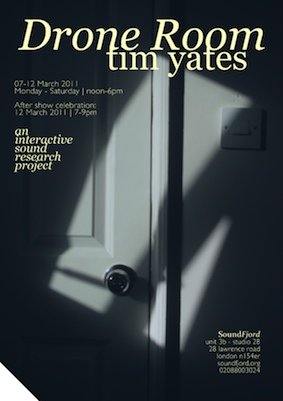 Adam Asnan and ARAR are currently utilising SoundFjord's studio to research in and around their practice, to create sounds they will later manipulate into a work to be performed at The Drop, Stoke Newington, London on 13 October 2010. an event organised by Entr'acte.

- Ultimate loudspeakers for home or studio